An “Agro-climatic zone” is a land unit in terms of major climates, suitable for a certain range of crops and cultivars and zone division of agro-climatic regions will help to achieve the optimum utilization of land area, and in a suitable manner to get the development of efficient farming systems and crop improvement.

What is Agro-climatic zone?

An “Agro-climatic zone” is a land unit in terms of major climates, suitable for a certain range of crops and cultivars.

National commission on agriculture (1971) classified the country into 127 agro-climatic zones. The planning commission has adopted agricultural Zones on the various parameters like rainfall, temperature and prevalent soil types in the region.

The main objective was to integrate plans of the agro-climatic zones with the state and national plans to
enable policy development based on techno-agro-climatic considerations. In the agro-climatic regional
planning, further sub-regionalization was possible based on agro-ecological parameters.

The Western Himalayan Region covers Jammu and Kashmir, Himachal Pradesh and the hill region of
Uttarakhand. The valley floors grow rice, while the hilly tracts grow maize in the kharif season. Winter
crops are Barley, Oats, and Wheat.

The region supports horticulture, especially apple orchards and other temperate fruits such as Peaches, Apricot, Pears, Cherry, Almond, Litchis, Walnut, etc. Saffron is grown in this region.
The main problems of this region are poor accessibility, soil erosion, landslides, inclement weather,
inadequacy of marketing and storage facilities. The population is generally rural-based and poor

The Eastern Himalayan Region includes Arunachal Pradesh, the hills of Assam, Sikkim, Meghalaya,
Nagaland, Manipur, Mizoram, Tripura, and the Darjeeling district of West Bengal. The topography is
rugged. Temperature variation is between 25 °C and 30 °C in July and between 10 °C and 20 °C in January.
The average rainfall is between 200-400 cm. The red-brown soil is not highly productive Jhuming (shifting cultivation) prevails in the hilly areas.

West Bengal (except the hilly areas), eastern Bihar, and the Brahmaputra valley lie in this region. The average annual rainfall lies between 100 cm-200 cm. The temperature in July varies from 26 °C to 41 °C and for January from 9 °C to 24 °C. The region has adequate storage of groundwater with a high water table.
Planning strategies include improvement in rice farming, horticulture (banana, mango and citrus fruits),
pisciculture, poultry, livestock, forage production, and seed supply.

The Middle Gangetic Plain region includes large parts of Uttar Pradesh and Bihar. The average
temperature in July varies from 26 °C to 41 °C and that of January 9 °C to 24 °C average annual rainfall is
between 100 cm and 200 cm. It is a fertile alluvial plain drained by the Ganga and its tributaries. Rice,
maize, millets in kharif, wheat, gram, barley, peas, mustard and potato in rabi are important crops.
Reclamation of user lands, wastelands, and fallow lands for agriculture and allied activities (agro-forestry, silviculture, floriculture etc.) should be done.

In the Upper Gangetic Plains region come the central and western parts of Uttar Pradesh and the Hardwar and Udham Nagar districts of Uttarakhand. The climate is sub-humid continental with temperature in July between 26 °C to 41 °C and temperature in January between 7 °C to 23 °C. Average annual rainfall is between 75 cm-150 cm.

The soil is sandy loam. Canal, tube-well and wells are the main source of irrigation. Besides modernising traditional agriculture the region needs special focus on dairy development and horticulture. Strategies should include developing multiple mixed cropping patterns.

This region (also called the Satluj-Yamuna Plains) extends over Punjab, Haryana, Chandigarh, Delhi and the Ganganagar district of Rajasthan. Semi- arid characteristics prevail over the region, with July’s mean
monthly temperature between 25 °C and 40 °C and that of January between 10 °C and 20 °C.
The region has the credit of introducing Green Revolution in the country and has adopted modern
methods of farming with greater degree of mechanisation. The region is also facing the menace of
waterlogging, salinity, alkalinity, soil erosion and falling water table.

This region includes the Chhotanagpur Plateau, extending over Jharkhand, Orissa, Chhattisgarh and
Dandakaranya. The region enjoys 26 °C to 34 °C of temperature in July, 10 °C to 27 °C in January and 80
cm-150 cm of annual rainfall. Soils are red and yellow with occasional patches of laterites and alluviums.
The region is deficient in water resources due to plateau structure and non-perennial streams. Rainfed
agriculture is practised growing crops.

The region is spread over Bundelkhand, Baghelkhand, Bhander Plateau, Malwa Plateau, and Vindhyachal Hills. Semi-arid climatic conditions prevail over the region with temperature in July 26 °C to 40 °C, in January 7 °C to 24 °C and average annual rainfall from 50 cm-100 cm. Soils are mixed red, yellow and black.

Comprising southern part of Malwa plateau and Deccan plateau (Maharashtra), this is a region of the
regur (black) soil with July temperature between 24 °C and 41 °C, January temperature between 6 °C and 23 °C and average annual rainfall of 25 cm-75 cm. Wheat, gram, millets, cotton, pulses, groundnut, and oilseeds are the main crops in the rain-fed areas, while in the irrigated areas, sugarcane, rice, and wheat, are cultivated. Also grown are oranges, grapes and bananas.

This region falls in interior Deccan and includes parts of southern Maharashtra, the greater parts of
Karnataka, Andhra Pradesh, and Tamil Nadu uplands from Adilabad District in the north to Madurai
District in the south. The mean monthly temperature of July varies between 25 °C and 40 °C, and the
mean January temperature is between 10 °C and 20 °C. Annual rainfall is between 50 cm and 100 cm. It is an area of dry-zone agriculture. Some of the area under coarse cereals may be diverted to pulses and oilseeds. Horticulture, dairy development and poultry farming should be encouraged.

Extending over the Malabar and Konkan coastal plains and the Sahyadris, the region is humid with the
mean July temperature varying between 25 °C and 30 °C and mean January temperatures between 18°C
and 30 °C. The mean annual rainfall is more than 200 cm.
The agricultural development must focus attention on raising of high value crops (pulses, spices, and
coconut). Development of infra- structural facilities and promotion to prawn culture in brackish water
should be encouraged.

This region includes the hills and plains of Kathiawar, and the fertile valleys of Mahi and Sabarmati rivers. It is an arid and semi-arid region with the mean July temperature reading 30 °C and that of January about 25 °C. The mean annual rainfall varies between 50 cm and 100 cm.
The main strategy of development in this region should be canal and groundwater management, rain
water harvesting and management, dry land farming, agro-forestry development, wasteland development and developing marine fishing and brackish/back-water aquaculture development in coastal zones and
river deltas.

Extending over Rajasthan, West of the Aravallis (Rajasthan), this region has an erratic rainfall of an annual average of less than 25 cm. The desert climate further causes high evaporation and contrasting
temperatures—28 °C to 45 °C in June and 5 °C to 22 °C in January. Bajra, Jowar, are main crops of kharif and wheat and gram in rabi. Livestock contributes greatly in desert ecology.

The island region includes Andaman-Nicobar and Lakshadweep which have typically equatorial climate
(annual rainfall less than 300 cm; the mean July and January temperature of Port Blair being 30 °C and 25°C respectively).

The soils vary from sandy along the coast to clayey loam in valleys and lower slopes. The main thrust in development should be on crop improvement, water management and fisheries. Improved variety of rice seeds should be popularized so as to enable farmers to take two crops of rice in place of one.

For fisheries development multi-purpose fishing vessels for deep sea fishing should be introduced, suitable infrastructure for storage and processing of fish should be built up, and brackish water prawn culture should be promoted in the coastal areas.

Representation of Agro-climatic zones of India

An agro-ecological regions (AER) is the land unit on earth’s surface, carved out of agro-climatic region by superimposing climate on landforms and soils, which are the modifiers of climate and length of growing period.

The National Bureau of Soil Survey & Land Use Planning (NBSS&LUP) came up in 2016 with twenty agro-ecological zones, revised by, based on the growing period as an integrated criteria of effective rainfall, soil groups and classifications, delineated boundaries adjusted to district boundaries with a minimal number of regions.

Subsequently, these Twenty agro-ecological zones were sub- divided into 60 sub-zones.

What are the Agro-Climatic Zones? 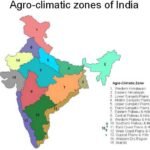 There are 15 Agro-Climatic Zones , listed here:


What are the Agro-Ecological Zones / Regions in India? 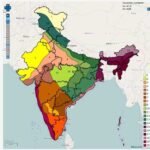 What is agro climate zone?

An “Agro-climatic zone” is a land unit in terms of major climates, suitable for a certain range of crops and cultivars. There are 15 Agro-Climatic Zones in India.

How many agro-climatic zones are there in India?

National commission on agriculture (1971) classified the country into 127 agro-climatic zones but now there are 15 Agro-Climatic Zones in India.. The planning commission has adopted agricultural Zones on the various parameters like rainfall, temperature and prevalent soil types in the region.