Tillage is the agricultural preparation of land soil, to loosen it by mechanical agitation for growing crops or cultivation by various types, such as digging, stirring, and overturning and can be add plant material.

Tillage definition: Tillage is the process of loosening soil through mechanical agitation such as digging, stirring, and overturning in order to add plant material.

Tilth is the physical condition of soil obtained out of tillage (or) it is the result of tillage. The tilth may be a coarse tilth, fine tilth or moderate tilth.

Tillage comes from the ‘Anglo-Saxon’ terms Tilian and Teolian, which mean ‘to plough and prepare land for seed sowing, cultivating, and raising crops.’ Jethro tull, known as the “Father of Tillage,” recommended for thorough ploughing to break up the soil into small particles.

Tillage meaning – ”the preparation of land for growing crops” or
”land under cultivation”
“Tillage” can also mean the land that is tilled.

Father of tillage and Father of zero tillage.

Inventions: Invented machinery for the agricultural preparation of soil and seed drill and horse-drawn hoe.

[Note: Weed is a Undesired Plant in a particular crop area/Producing land.]

Objectives of Tillage for Crop Production

Tillage procedures done to prepare the field for crop production are referred to as preparatory tillage. When the soil is in a workable condition, it involves deep opening and loosening the soil to achieve a desired tilth as well as incorporating or uprooting weeds and crop residue.

Types of preparatory tillage
a. Primary tillage
b. Secondary tillage
c. Layout of Seedbed and Sowing

The tillage operation that is done after the harvest of crop to bring the land under cultivation is known as primary tillage or ploughing. [Ploughing is the opening of compact soil with the help of plough(s).
Different types plough(s): Country plough, mould board plough, bose plough, tractor and power tiller drawn implements are used for primary tillage.

The objective of primary tillage is-

The objective of Secondary tillage is-

Layout of Seedbed and Sowing

This is also a part of the preparatory tillage process for levelling, the levelling board, buck scrapers, and other tools are also used, and markers are used to layout the seedbed.

After tillage refers to the tillage operations performed in the standing crop after sowing or planting but before the crop plants are harvested.
Inter cultivation is also known as post seeding/planting cultivation. It involves harrowing, hoeing, weeding, earthing up, drilling or side dressing of fertilizers etc. Inter cultivation is done with spades, hoes, weeders, and other tools.

Zero tillage is also known as No-till farming or direct drilling. Zero tillage an agricultural technique for growing crops or pasture without disturbing or mechanical agitation for agricultural preparation of soil.

This method involves planting a fresh crop in the remains of the preceding crop without any soil tillage or seed bed preparation, and it is possible when all weeds are controlled using herbicides.

Soils with a coarse textured surface horizon, strong internal drainage, high biological activity of soil fauna, favorable initial soil structure, and an adequate amount of crop residue as mulch are suitable for zero tillage. In the humid and sub-humid tropics, these circumstances are common in Alfisols, Oxisols, and Ultisols.

Zero tillage can be achieved in a variety of ways, including till planting. The preceding crop row is cleared with a wide sweep and rubbish bar, and the planter opens a narrow strip into which seeds are sown and covered.

Herbicide functions are expanded in this case. Before seeding, the existing vegetation must be eradicated, which is done with broad spectrum non selective herbicides such as glyposate, paraquat, and diquat.

Tillage is the process of loosening soil through mechanical agitation such as digging, stirring, and overturning in order to add plant material.

Who is the father of tillage? 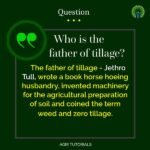 What is Zero Tillage?

No-till farming or direct drilling are other terms for zero tillage.
Zero tillage is a farming strategy that involves cultivating crops or pasture without disturbing or mechanically agitating the soil.